Who would have imagined that one of the largest western art museums in the country would be right here in the southeast. We are very blessed to have such an incredible western art museum… for me it’s only an hour away. I was honored to be asked to participate in their first ever Quick Draw event several months back on Friday February 22 at their annual Boots N’ Saddles Pre-Gala Party. I’m just a bit delayed in blogging about it, which seems like the case with most things in my live, having three year old twins at the age of forty-six.

To prep for it did quite a few small western landscape paintings to study and know my subject matter before I showed up to do a painting in 90 minutes while an audience of onlookers watched me and the six other artists taking part in the event. Preparing for the event reminded me why I became an artist in the first place.

When I was a kid the only thing I can ever remember my dad reading was Louis Lamour Western novels (every single one multiple times) and he always talked about wanting to go see the West. In the eighth grade we took a big RV road trip cross-country to Yellowstone and Tetons National Park. I had been drawing and fascinated with art since I was a little kid. So the Buffalo Bill Museum was one of our major stops. This was the first time I had ever seen a real painting and it sort of blew my mind. That’s when I knew I had to paint. Painting just had so much more of a presence and permanence to it than drawing, almost as if the paintings could come to life. It was that same trip that gave me a great love for the outdoors.

Years later I would take many trip to the west to paint and study with various artist from Wyoming and Colorado. I finally decided to move to Colorado at the end of 2008. Unfortunately, this was extremely bad timing after the economy totally crashed. Like many artist, I barely made it through that year and decided to cut my loses and move back east where I was already more established. That’s when I discovered the Booth Western Art Museum and participated in a few events like the ‘South of the Sweet Tea Line” show and gave a lunch and learn presentation painting demo. Due to logistics and the need to focus on southeastern galleries for a while I began focusing less on traveling and painting the west. That started to change when I married an Alaska girl a few years ago and we started making trips back to the far northwest. I feel like the mountains began to call me back again. Then that changed again when my wife announced that she was pregnant with twins. Suddenly I was back confined to the studio again and barely getting enough sleep to function enough to paint, much less travel.

Needless to say, I was very excited when I received an invitation from Seth to be a part of the Quick Draw event last February. I began going through all my reference material and was taken back to all the things that originally drew me to the west and the mountains. I did several studies to prep for the quick draw and this is the one I ended up using to paint the quick draw painting. 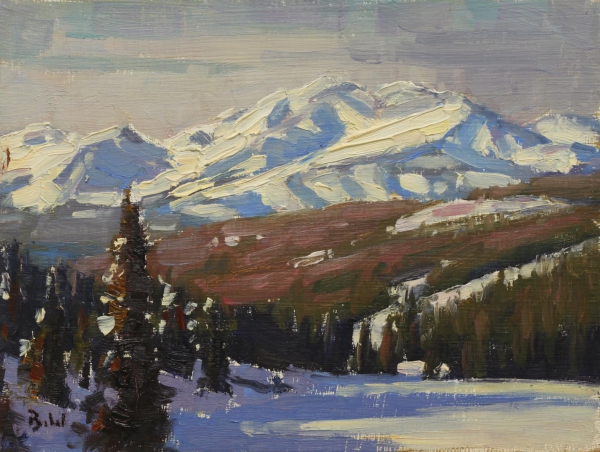 These are a few shots of me painting at the Quick Draw. 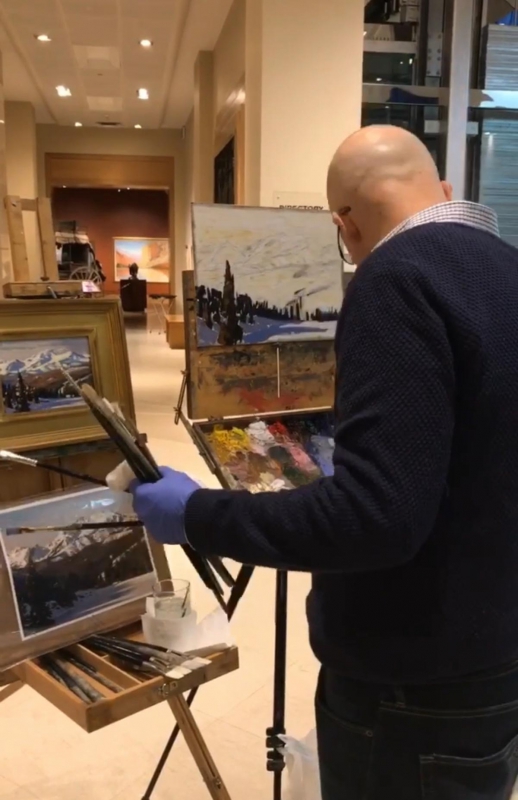 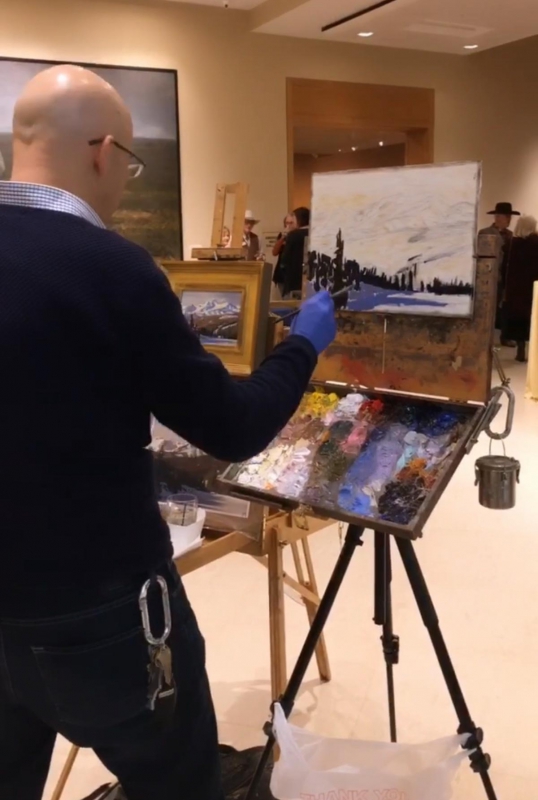 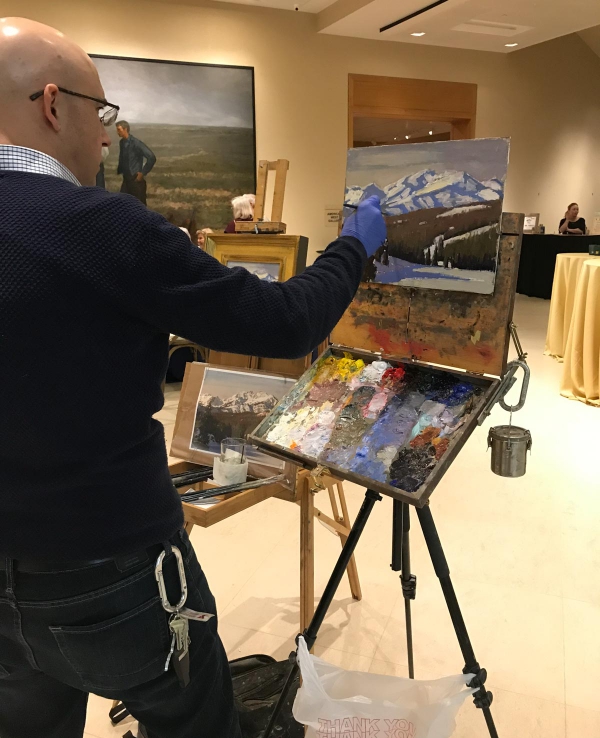 Then this is me exhausted and in a total daze after forty five minutes. 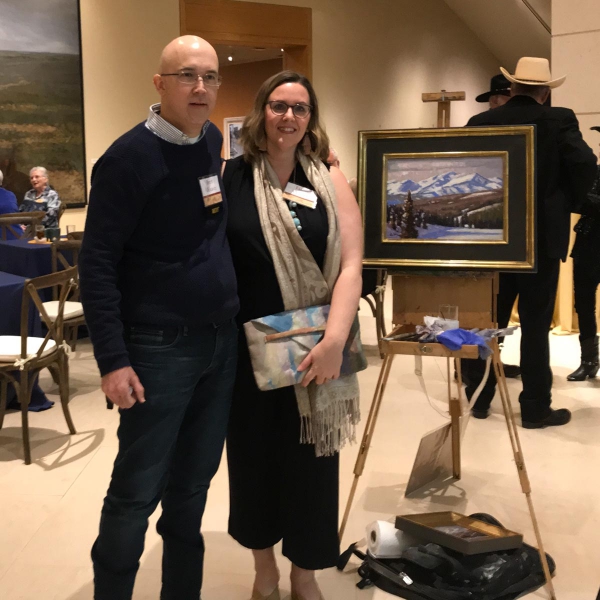 And these are the wonderful collectors that I just had the pleasure of meeting after finishing and framing up the painting. 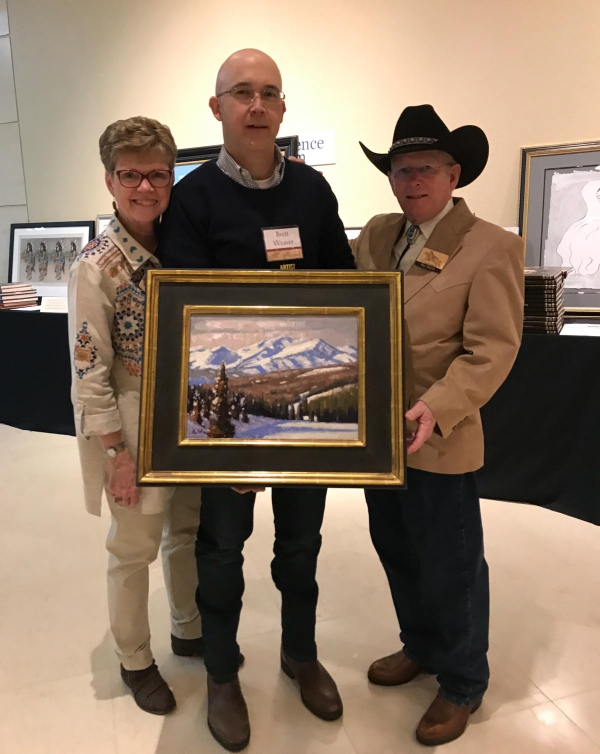 Since then I’ve been working on quite a few new western landscapes. Feel free to go to my landscapes page to check out what’s new.